June 20, 2018: Our new article on the movements and habitat characteristics of California Brown pelicans is now published! Find it here...

​May 23, 2018: Our MS student Rochelle Streker is back in Alabama for another field season. For her second year, she will keep collecting data on the nesting biology of Brown pelicans in Mobile Bay. She also plans to band more juveniles with blue plastic bands. Read her blog reports here.

​February 2, 2018: You can now find our Twitter graphic novel on our Presentations page!

October 13, 2017: Our study on pelican diet in the northern Gulf is now published! Read more...
Don't have the patience to read the whole publication: find our twitter summary here!
September 14, 2017: We just received the first observation of a juvenile pelican we color-banded this summer! Blue-band AKW was observed yesterday at Fort Pickens, in Pensacola, FL, about 50miles away from Gaillard Island, AL where it was born. From previous reports of color-banded pelicans we now know that Pensacola's bays are a hot-spot for observations of young banded pelicans as they disperse from Gaillard Island. Further into the winter, they will move along the Gulf coast of Florida, sometimes reaching the Keys and even Cuba! 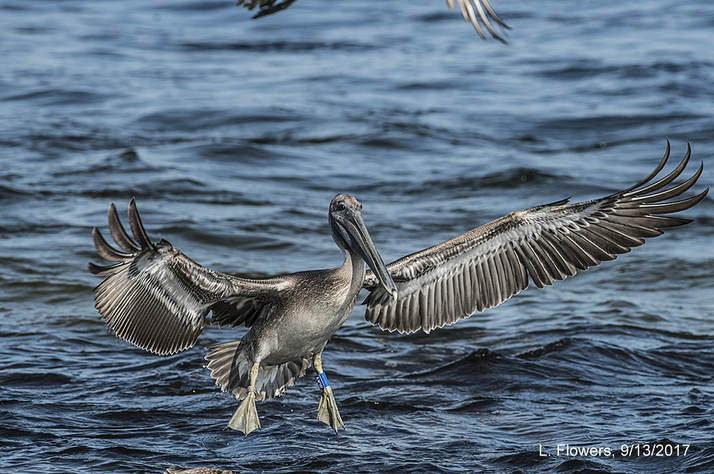 July 12, 2017: Following our last publication, our GPS-tracking data are now available to the public on Movebank.org. You can find the dataset by searching for Brown pelican data from Lamb et al (2017) or Study ID 296027617. The dataset counts over 165,000 GPS locations. You are free to explore the tracks but do contact us first if you plan on using the data. Thanks! 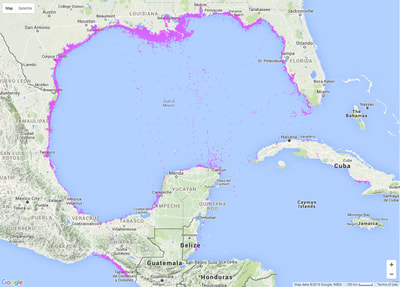 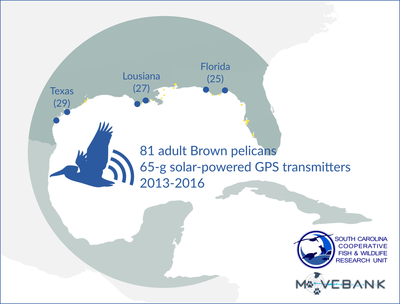 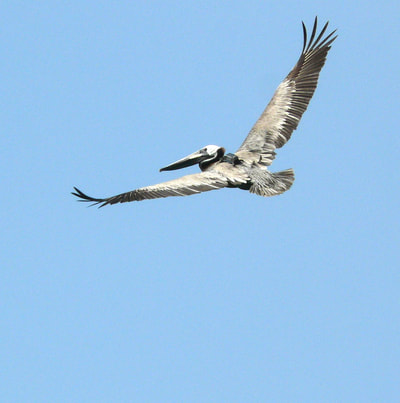 July 10, 2017: Our article on the influence of density-dependent competition on foraging and migratory behavior of Brown pelicans is now freely available online!
Influence of density-dependent competition on foraging and migratory behavior of a subtropical colonial seabird in Ecology & Evolution http://onlinelibrary.wiley.com/doi/10.1002/ece3.3216/full
Using GPS-tracking, we studied the influence of colony size and other factors on the behavior of breeding and migrating Brown pelicans. We showed that pelicans from larger colonies had larger foraging ranges and were more likely to migrate, and migrate farther, than pelicans from small colonies. We also showed that females and small males were more likely to migrate than large males. The full article is available on Ecology & Evolution's website but you can also read our graphic summary on our Presentation page (presented for #WSTC3).
June 12, 2017: We just deployed our 25th GPS tag for South Carolina!  Today was our second visit to the coast to deploy satellite-GPS tags on nesting Brown pelicans. With great help of SC DNR, we could tag 11 adults on Bird Key (south of Folly Beach) in May, and 7 at the colony on Castle Pinckney (in Charleston harbor) and 7 at Marsh Island (a pelican breeding island in Cape Romain National Wildlife Refuge) this weekend. 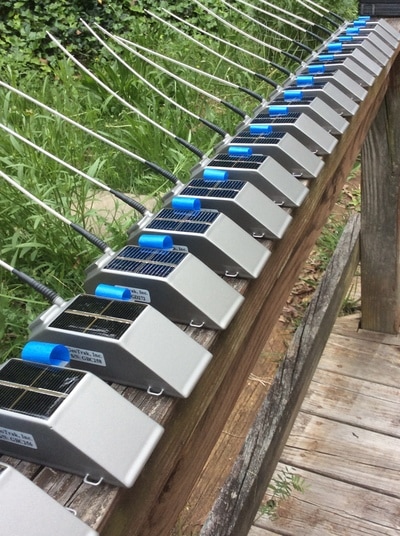 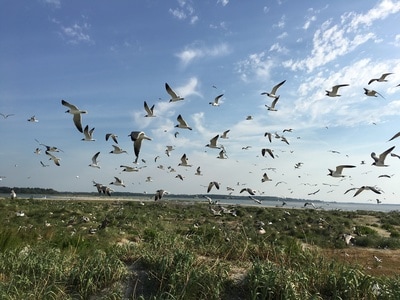 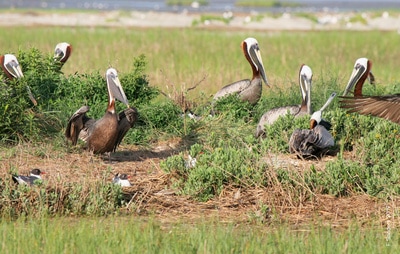 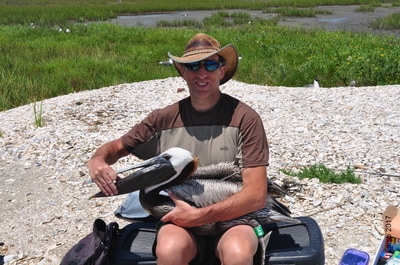 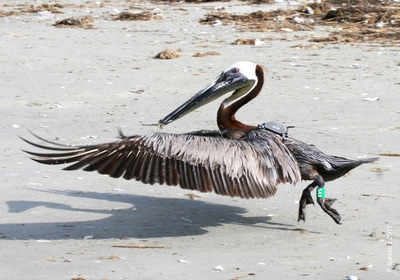 March 2017: Starting April 1st, our graduate student Rochelle Streker will be conducting field work on Gaillard and Cat Islands, AL, in colaboration with Dr. John Dindo from the Dauphin Island Sea Lab. Rochelle, who has had extensive experience with seabirds in the past (though never with pelicans), will be investigating drivers of local-scale variation in nesting success and chick survival. She will also be contributing to our blog and our twitter account, so stay tuned to see how her fieldwork is going!
December 10, 2016: Our two first publications are now available as open-access articles:
- Behavioral and reproductive effects of bird-borne data logger attachment on Brown Pelicans (Pelecanus occidentalis) on three temporal scales in Journal of Ornithology: https://link.springer.com/article/10.1007%2Fs10336-016-1418-3
- Physical condition and stress levels during early development reflect feeding rates and predict pre- and post-fledging survival in a nearshore seabird in Conservation Physiology: http://conphys.oxfordjournals.org/content/4/1/cow060.full
Juliet will be writing blog posts about them, so watch this space!
Novembre 27, 2016: If you use the website Flickr (flickr.com) to store and share photos of wildlife or of your recent visit to the coast, you can now share your pictures of banded Brown pelicans with our group: we create the group Banded Brown Pelicans (https://www.flickr.com/groups/bandedpelicans/) to collect observations from photographers. You can also ask questions to your fellow photographers or ourselves on the discussion board. See you there!
June 30, 2016: If you always wanted to know what it is like to work in a pelican colony, the Crab Bank Pelicam is for you! The SC Conservation League, together with SC DNR, placed a live-cam on a pelican colony in Crab Bank, a small island in Charleston Harbor, SC.
Watch it here:
http://coastalconservationleague.org/pelicam/
June 27, 2016: Project Pelican is looking for their first Master's student!
The selected candidate will study how the energetics and survival of nestling Brown pelicans vary with nest microhabitat characteristics. Expect to spend your summers on pelican islands in the Gulf of Mexico and your winters in upstate South Carolina, at Clemson University. To read the full offer and learn how to apply, go to http://wfscjobs.tamu.edu/jobs/m-s-graduate-research-assistantship-seabird-biology-u-s-geological-survey-clemson-university/.
April 12, 2016: Today, Juliet defend her PhD dissertation at Clemson University. Three years after starting this project, she is now Dr. Juliet Lamb! You can find her dissertation online (http://tigerprints.clemson.edu/all_dissertations/1645/​) but Juliet will also summarize her 5 chapters in her blog. Coming soon!
August 15, 2015: After three and a half months, the field season is over for us. We had a productive time working on pelican breeding colonies in the Florida panhandle and Mobile Bay, AL - we surveyed productivity (how many chicks are raised by each nesting pair), did provisioning observations (how often are pelican chicks fed by adults during the day), collected fish regurgitates (what fish species do they target, how much food do they bring back to their chicks) and feathers (are there differences in stress hormones and contaminants between colonies). We finished the season by banding 300 young pelicans with blue plastic bands to study their movements over the next years: if you see a banded pelican, you can report your observation here.
We spent the first two weeks of August at conferences in France (ICCB2015) and Maine (Waterbird Society Meeting), and now is time to make it back to the lab to analyse all the samples we collected over the summer!
July 22, 2015: Panama City local news channel ABC13 WMBB did a story on our project. Watch it here: www.mypanhandle.com/news/project-pelican-south-carolina-researchers-studying-seabirds-in-gulf-of-mexico 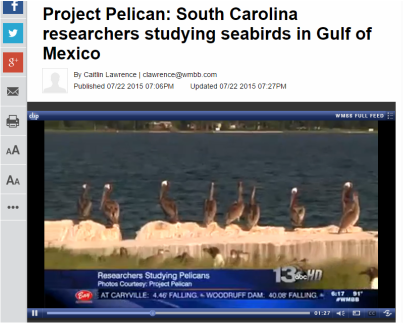 June 12, 2015: Juliet just came back from California where she hel﻿ped with the response to the May 19th Refugio Oil Spill. The Oiled Wildlife Care Network (OWCN) will be tracking 20 Brown pelicans to learn more about their whereabouts during the coming year. About half of the birds were oiled during the spill and have been rehabilitated thanks to the great work of ﻿International Bird Rescue﻿. OWCN asked us to show them how to successfully study pelicans using GPS tracking devices - needless to say, we were very happy to help.
You can read more about this story here: ﻿Previously oiled brown pelicans released back into the wild﻿ and here: ﻿Brown pelicans released following Refugio oil spill﻿.
Juliet also wrote a blog post about her experience: "Post-spill tracking in California".
April 17, 2015: We just started our 2015 field season! We are staying in Panama City, FL but will we be working in the Florida panhandle and Alabama: until the end of July, we will be gathering data on the breeding biology of Brown pelicans from St Marks National Wildlife Refuge, FL to the east, to Mobile Bay, AL to the west. Exciting!
March 27, 2015: Want to know about pelican migration in three minutes or less? Check out Juliet's ﻿﻿new blog post﻿﻿. 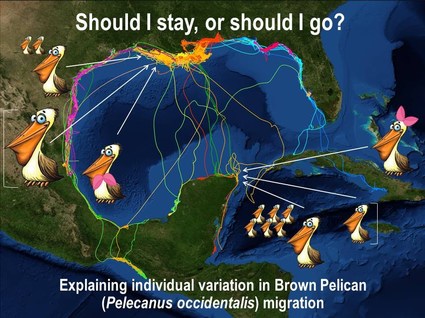 March 19, 2015: Spring is here and pelicans are migrating back to their breeding grounds in the Northern Gulf. Follow them live on our interactive map. As of today, RA69 (in pink, along the eastern coast of Mexico) has started its journey north after wintering in Tampico, MX and RA72 (yellow) is ready to fly across the Gulf of Mexico from the Yucatan peninsula. RAJ23 (in light pink) did not migrate but stayed in the Atchafalaya delta; it flew back to its colony on Raccoon Island, LA yesterday. The others will soon be on the move: keep in touch to watch as RA71 and CH24 fly across the Tehuantepec isthmus.
February 19, 2015: Juliet, PhD candidate on the project, is participating to the annual Pacific Seabird Group conference in San Jose, CA. She will be doing a presentation (on Thursday, Feb. 19: Should I stay or should I go? Physiology and geography predict individual migratory strategies in the Brown pelican) and a poster (Brown pelican fledging success and diet in the northwestern Gulf of Mexico: Potential drivers of changing regional distribution).
We will keep the presentation and the poster online soon for you to read.
Janu﻿ary 31, 2015: We received fan art! From Titouan, 3, "A pelican sleeping after a race" (not sure what it was racing against though. Scientists?): 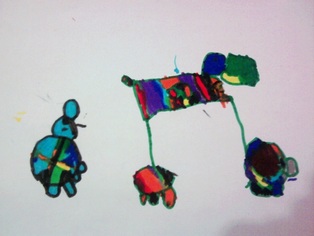 January 06, 2015: Happy 2015 to all of our readers! Here is a special treat to start this new year:
In the summers of 2013 and 2014, we tagged adult Brown pelicans with satellite tags (read more about it in Juliet's blog). We can follow where they go and here is where they are right now: note CH24 and RA71 on the other side of Mexico! (Update: check the map above for live locations of the tagged pelicans).
Our great thanks to Movebank for the map code.
December 11, 2014: We just started a twitter account for the project: @project_pelican. Feel free to follow us, report your observations, and share your pictures and questions with us.

October 1, 2014: Bronwen Taylor wrote an article on Shamrock Island for the Nature Conservancy - we are in it. Read it here.
​
September 2, 2014: New blog post on Juliet's website: Bandspotting
Powered by